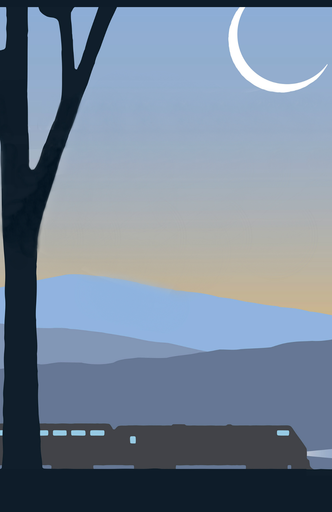 Call this one the Tale of two Tatums.  Trey Tatum, the playwright, has a masterful connection to words.  He writes humor with heart; never sentimental but moving none-the-less.

Pair him with the “other Tatum,” actress Tatum Hunter.  She recently graduated from Xavier University and was one of their brightest stars.  She has a tight grasp on the script. Figures, since she’s a playwright herself.

THE MIDNIGHT EXPRESS is the story of two step-sisters and how their relationship develops over the years.  Billed as a sort of coming of age story meets ghost tale, the meat of this play is in the fine acting between Hunter and Alex Roberts.

When they are in the groove towards the end of the play, there is no stopping the waves of emotion pouring out into the audience.  For a show that talks a lot about spirits and cosmic energy, this show is chock full of it.  I was moved.  Director Bridget Leak has staged it beautifully and creatively given the limitations of the space.

There were some bumpy moments in the opening performance, some script bumbles, and the show ran about 3 minutes longer than advertised.  But I am confident that as this show grows over the festival, it’s going to be one of the best.