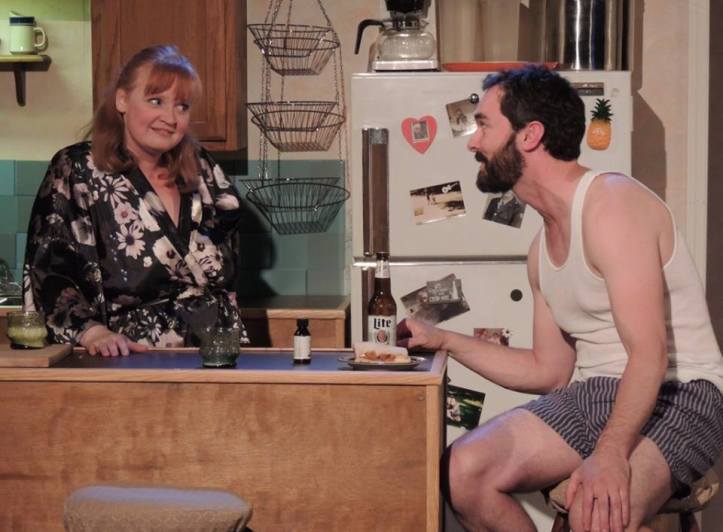 I’ll see them and often enjoy them immensely.  But its not fair to review an unfinished product.

That said, I am giving FRANKIE AND JOHNNY IN THE CLAIR DE LUNE five out of five stars, a ten rating, and and A+ 100% score.  In other words, it would be really difficult to top this production.

And I only saw a rehearsal.

This Terrence McNally written play is about two average, ordinary people who spend one night together.  It’s romantic, its hilarious, and it might be the sweetest play I’ve ever seen.

This is largely because of the chemistry between Sara Mackie (“Frankie”) and Dylan Shelton (“Johnny”).  Their energy is combustible; I’ve never seen two people play off of each other with quite this much passion and synergy.  Shelton is the best he’s ever been, reigning in his sometimes over-the-top comedic sensibility and finding the tender heart of the character.  Mackie, one of our cities finest actresses, makes exactly the right choices in intonation, body language, and she uses her expressive eyes to draw us into this fascinating relationship.

Director Jared Doren not only cast a perfect pair – he also helms a crew full of talented folks.  Rachel Kuhn’s magnificent set (built by master carpenter Jared Earland) is exactly whats needed for these actors to create magic.  The attention to detail by both Kuhn and propmistress Mary Gascho is outstanding.  Jim Watson’s sound design is realistic and gives the show a cinematic feel. Costumer Greta Stokes adds to the sense of time and place and lighting designer Glen Goodwin’s work is as good as any professional lighting designer in town.

Given the challenges this show has had with their original space and the need to move suddenly to a new venue, this show is miraculous.  Everything comes together; its magic.  I couldn’t be more impressed with the work of Doren, Mackie, Shelton, et al.  This show gets my highest recommendation and I would give it a great review.

But – I don’t review rehearsals.

Go see FRANKIE AND JOHNNY at Essex Studios opening Thursday, September 24th and running through October 3rd. The show is for mature audiences only; be advised of sexual situations, brief nudity, and adult language.  Click here for more information including tickets.