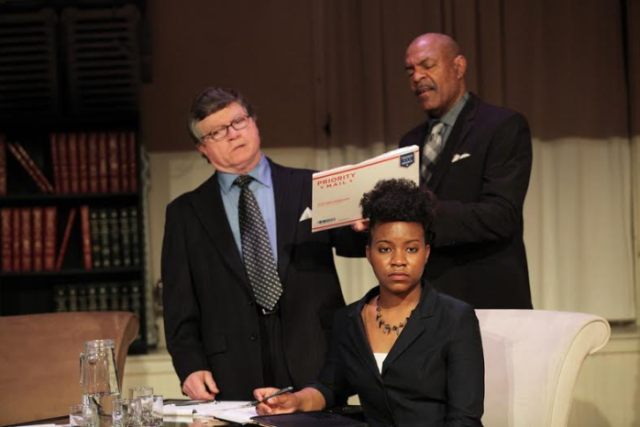 David Mamet’s RACE is a curious piece of theatre. It’s wordy, as usual for Mamet, but its rather timely. It’s definitely relevant – but maybe it tries too hard to controversial.  I’m not sure; I know that there were times when I was uncomfortable.  New Edgecliff Theatre is currently producing this play in the Hoefner Lodge featuring an all-star cast and a bright newcomer.  And once it heats up, it works well.

Bob Allen plays the rich client accused of raping a woman – a black woman – and he has sought the legal services of Michael Schooner and Reggie Willis’s characters.  They are assisted by a recent law graduate, “Susan,” played by rising Wright State graduate Renika Williams.

Everyone of these characters is beyond cynical; none of them are very likable.  Schooner is at his best when he’s irate and the script gives him a handful of moments to shine.  Willis is always charming; there’s something Morgan Freeman-esque about him.  (Just as I wrote that, I wondered to myself if it would be construed as racist to imply that one of our leading African-American actors reminds me of another African America actor. After all, I didn’t compare Schooner to anyone else?  White guilt does create a quandary.)  Allen does his best with a character that doesn’t say or do much, while Williams handles her thin dialogue as well as she can.

The night I saw the show it seemed that everyone was tentative in the first scene.  Maybe it was due to the lack of an audience but once they dug into the material, I thought the performances were spot on.  It’s certainly a show that provokes thought and discussion.

The play is directed by Daryl Harris and he has created some nice dramaticly tense moments.  This is a non-traditional space and New Edgecliff, which only here temporarily, has again made interesting use of it.  There are twists, turns, and you aren’t ever quite sure if these folks are telling the truth.  Overall, the truth is this is definitely one that you’ll be talking about on the ride home.