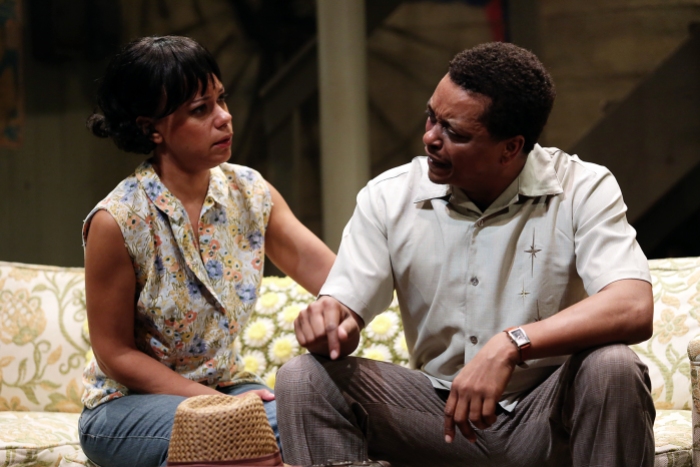 No one ever said Lynn Meyers was afraid to tackle tough material.  As the producing artistic director of Ensemble Theatre of Cincinnati, she selects what shows go on stage every year – and she has a knack for picking relevant contemporary plays.  But in her curtain speech, she said that she selected the incredibly timely DETROIT ’67 before the headline making news stories about police and race relations.

And its an interesting play, for sure.  It’s the story of a brother and sister – “Lank” and “Chelle” – who use their late parents basement to host after hours parties.  One night, while on their way home from a club Lank and his best friend, “Sly,” pick up a drunken, battered white girl and take her home.  She’s got secrets, of course, and those secrets are a catalyst for much of the second act’s fallout.  A RAISIN IN THE SUN for the 21st century it is not, though there are shades of that classic play peppered throughout.  Unfortunately the script by Dominique Morriseau doesn’t quite know what it wants to be and instead of being a focused narrative it occasionally veers off into preachy melodrama, too much for my tastes.  It would serve the show to shave off about twenty minutes.

That said, however, it is definitely worth seeing if for the amazing performances by Bryant Bentley and Zina Camblin.  Bentley (“Lank”) is completely natural, genuine, and authentic.  This is his first time on stage at Ensemble, but I doubt it’ll be his last. At least I hope not; he’s amazing in his portrayal of a man, wishing bettering himself by investing in a bar.  In that way, this show is very RAISIN-like.  Camblin plays his sister, Chelle, and she is conservative, not sure that spending their parents money on a bar is a great choice.  She also definitely doesn’t think bringing a white woman into their home – especially without knowing her story – is a very good idea.  Turns out she’s probably right.

That white girl, “Caroline,” is played by the outrageously talented Leslie Goddard.  Last seen in MAME at Human Race in Dayton and in CHICAGO at The Carnegie, this award-winning actress doesn’t over do it, though she could have.  Her restraint matches well with the nice, elegant acting style of Camblin.  Their final scene together is heart-wrenching and beautiful.

Burgess Byrd plays “Bunny;” a confident, sexy woman who serves up much of the comedic relief in the show.  Byrd is a favorite on stages in town and its easy to see why.  She’s likable, funny, and talented.  And while she’s incredibly entertaining in this role, it’s the quieter moments she has that interest me.  Byrd is a much better actress than she may even know herself; I hope she continues to find a variety of roles to sink her teeth into.  Darnell Pierre Benjamin rounds out the cast as “Sly,” and is believable as the wing-man for Lank in his business endeavor.  It’s vital that we invest in the relationship between to the two men for the climax to have an emotional wallop and credit these two actors for making that happen.

A minor critical note but an important one: I was sitting in the third row and the cast was over projecting their lines at the start of the show.  They relaxed as the show continued but the volume was so high some of the words got lost in the natural reverb of the building.

This show is set in 1967, of course, and the set is perfect.  Like always, the design is impeccable – and Shannon Rae Lutz’s prop work is phenomenal.  Its her attention to detail that allows the actors a space to become their characters.  Its marvelous.  The sound design is wonderful, featuring songs of the era, but with a seamless transition from house speakers to stage sound.  It’s spectacular, in the most subtle of ways.  Chad Phillips costumes fit the period and he dresses Byrd especially well.  The technical elements are superb.

Director Meyers has assembled a terrific cast, brings a consistent vibe to the stage throughout, and it all works despite a somewhat problematic script.  And so even though it’s not perfect, DETROIT ’67 is important.  And in a city full of really good theatre, “important” might just be the highest compliment a show can receive.