Some of the shows I look forward to most each season are student created.  From Wright StuCab to CCM’s Carols for a Cause, I enjoy seeing youthful freedom displayed on stage.  CCM’s TRANSMIGRATION allows the students in the Drama department of UC to flex their creative chops as they work in teams of six to create unique theatrical works of art, all of which are advenuterous in varying degrees. 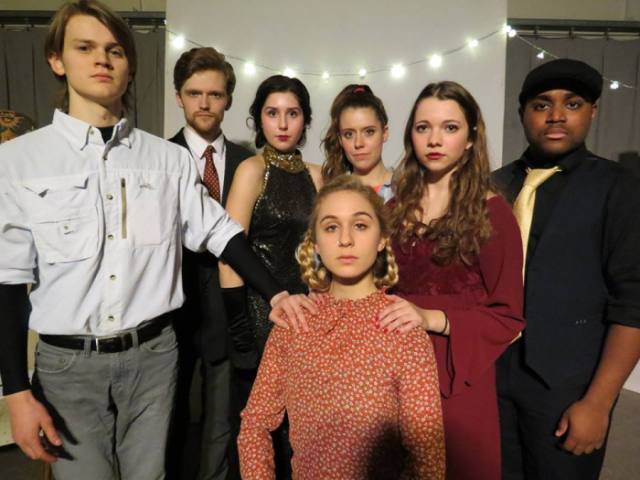 I attended opening night and was able to see three of the six selections.  First up was COULTER CLIFFS INN featuring Trey Wright, Alison Sluiter, Colin Edgar, Clare Combest, Annie Grove, Kenzie Clark and Rupert Spraul. This group of people are trapped in time in this hotel until someone else comes – and then one gets to leave.  They make their case and then the audience chooses who that should be.  Its fun and also emotionally intense.

I chose to see this one first because I once got to play on stage with Spraul while he was still a senior at Oak Hills; I was Chief Bromden and he was one of our Billy Bibbits in ONE FLEW OVER THE CUCKOO’S NEST.  He was very talented then and I can see that a year of training with Professor Hess and faculty have improved him even more.  I also sought out Annie Grove as I enjoyed her piece so much last year.  There’s just something about her on-stage sincerity that gets me every time.  I really enjoyed this sci-fi drama and recommend it highly.

Next up was MANDATORY FUN featuring AC Horton, Colleen Ladrick, Andrew Iannacci, Julia Netzer, Michaela, Tropeano, James Egbert and Carissa Cardy. This dystopian game show fantasy referenced robots and maybe time travel?  Its bizarre. I am a fan of Horton’s quirkiness and I am only speculating, but I think she had a large hand in the creation of this one. There’s an energy about her that intrigues but this show was just a little too odd for my tastes.  I always appreciate creativity and hard work, however, so kudos to these folks for putting themselves and their work out there in a world where people like me express opinions.

Finally, I saw the comedy piece A FOOL’S PARADISE featuring Spencer House, Fabiola Rodriguez, Devan Pruitt, Spencer Lackey, Katie Langham, Isaac Hickox-Young and Olivia Passfiume.  If you’ve read this blog, you might know that I think Katie Langham is one of the funniest people alive and between her and the two Spencers, I ws very excited to see what this show was all about.  It’s the story of a community theater troupe, who in the face of adversity, overcomes.  And gay jokes.  And incest jokes.  Visual sight gag ones.  It’s kind of a hot mess but against my better judgment I think I liked it a lot.  There’s something about the wild abandon with which the actors took on their roles that is inspiring.  Think WAITING FOR GUFFMAN meets that SNL sketch where the family french kisses one another with a little musical farce mixed in.  Oh, and ROMEO AND JULIET, too.

I told you this was adventurous theatre.

The other three pieces are:

Neutral and Non-Partisan
Capture their minds, and hearts and souls will follow.

Operation [BLANK] has been compromised. Indoctrination tactics, regarding GREY PSYCHOLOGICAL OPERATIONS (PSYOP), implemented to “Leave it to Beaver” have been breached. Target [BLANK] detected an abnormality resulting in an imminent threat of exposure. Joint staffer, [BLANK], has declined to give a statement in order to maintain plausible deniability for the US government. Sector [BLANK] running operation [BLANK] sanctioned “the six” to fabricate authenticity in order to enhance productivity to the effect of [BLANK], which would dissolve variables concerning gross domestic product and quality of life. It is advised, and therefore essential, to dispose all records of incrimination and proceed by code [BLANK].

An unsuspecting reporter serendipitously stumbles upon a mystical frozen yogurt stand in rural Oregon. The charming characters that populate the stand catalyze a spritiual journey and raise more questions than expected. What does it mean to be part of a community? The reporter is forced to confrontsocial norms and societal constraints, and is left forever wondering: Are we all homogenized, or are we… cultured?

Seven Feet Under
How low would you go before you’re buried alive?

This twisted depression-era fairy tale follows an eccentric family of seven miners as they pursue a legendary treasure for their mistress. In a story of adventure, obsession and greed, they must figure out how low they are willing to go to attain a better life.

Tickets are free but you need to call the CCM Box Office at 513-556-4183 to reserve. Then you’ll select up to four and visit a table where you’ll be given tickets for each to guarantee space in each showing.  The show continues its run tonight and tomorrow at 7pm.  More information is available here.