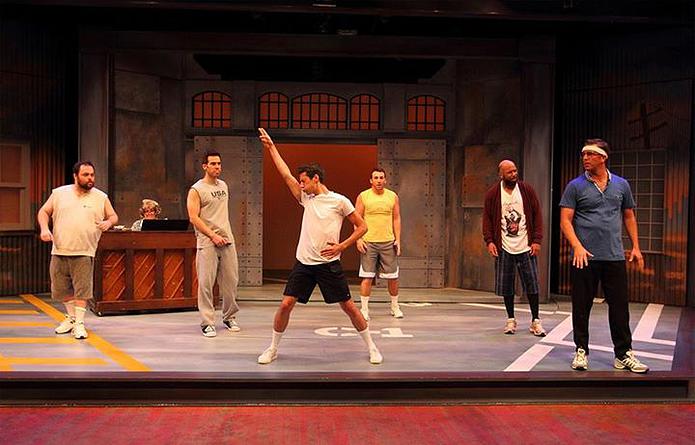 When the “The Full Monty” came out in 1997, it achieved critical and commercial success. At a budget of around three and a half million dollars, it was not expected to be a huge blockbuster. And who would have thought the story of six unemployed “regular guys” becoming strippers would  go on to become a hit Tony-nominated musical?

THE FULL MONTY, directed by Joe Deer, is not perfect.  Opening night suffered from an overpowering orchestra and some disappointing line-delivery by a couple of actors.  Yet, there’s more than enough good here to justify the ticket price. 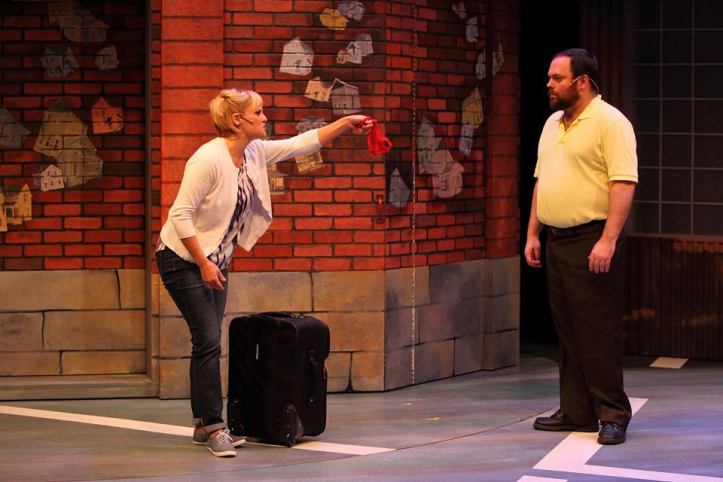 Christopher DeProphetis stars as “Jerry,” an out of work steel worker who is behind on child support and in danger of losing custody of his son (played by Peanut Edmonson.)  His best friend, “Dave,” is played by the very natural and hilarious Matt Welsh.  Dave is also out of work and his self-image has suffered; he also thinks he’s too fat for his wife to love him anymore.  His wife, “Georgie,” is played by the irrepressible Leslie Goddard.  When she’s not on stage, she’s sorely missed.

Dave and Jerry have an encounter with a Chippendales dancer and they decide that they could make money by stripping . . . because after all, they are real men, not pretty boys like Richard Jarrett’s “Keno.”  Along the way, Dave and Jerry recruit other unlikely suspects for “Hot Metal,” the one night only strip show.  Ticket sales are slow and so Jerry promises that they’ll go all the way – the “full monty” – which draws a giant crowd.

But for me the duo of Matt Kopec (“Malcolm”) and Josh Kenney (“Ethan”) steal the show.  Their energy, charisma, and talent are captivating.  Kenney has great comic timing and makes some subtle choices that entertain and delight.  And Kopec layers his character with a sweetness and authenticity that makes him feel real.  I found it hard to take my eyes off of him.

Deer and co-choreographer Dionysia William’s do an excellent job; sometimes the dancing is supposed to look bad and other times it is not.  Finding the balance between the two is challenge but its one of the best things about this show.  The set by Dick Block is functional, versatile, and works well.  The costumes are character-consistent and well done and the orchestra sounds great (even if they are way too loud).  The vocal work, when you could hear it, was top-notch.

THE FULL MONTY is great fun and a nice way to start a season.  I highly recommend you get your tickets now as this one will sell very well.  (Do be aware that there are adult themes, language, a lot of flesh, and some brief full frontal male nudity.)

THE FULL MONTY runs through October 4th at The Loft Theatre in downtown Dayton.  Tickets and more information can be found here.  All photos by Scott J. Kimmins.