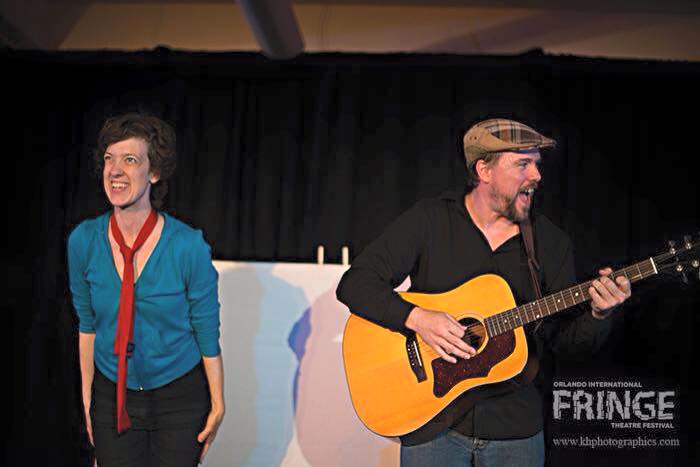 Paul Strickland is a gem.  His uncanny storytelling ability is something to behold; he’s a brilliant writer, beyond clever, and engaging on stage.  For the last two years, he’s performed solo at the Cincinnati Fringe. This year, he’s brought along a partner, Erika Kate MacDonald, to assist.  They sing well together, have a familiar rapport, and have produced a compelling show.

It’s strange, though, at least for me.  Strickland – while he can be intense – is never manic or over the top.  MacDonald, though, is quite expressive and sometimes overpowering.  It’s like he’s in a coffee shop while she’s in a cabaret bar.  But somehow despite these differences in style it works.

I’ve never seen Strickland’s other shows where he talks about his trailer park living family, especially Aunt True and Uncle False.  He touches on them in this piece and it left me wanting more.  He does tell some interesting stories – a ghost tale, a children’s story, and more – and the use of shadow puppetry gives the Fringe-appeal some clamor for.

Lucky for us, these two recently relocated to the city.  We’ll get to see more of their work later as Know Theatre stages “Andy’s House of [blank]” as part of their MainStage season and there are other things in the works.  Please check out TalkingPaul.com for more info.  I’m anxious for more.

TALES TOO TALL FOR TRAILERS plays one last time tonight (Friday, June 5th) at 8:15 at 17 E. Court Street as part of the Cincinnati Fringe Festival.  Click here for more information.