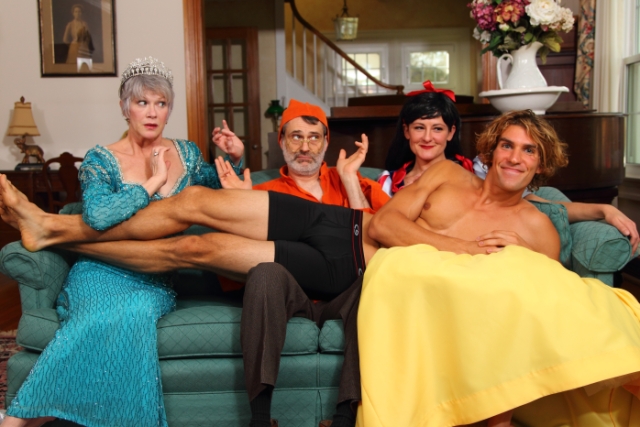 Sometimes I get annoyed when a play tries to be too cute.  there are moments in Christopher Durang’s Tony-award winning script that push right to that point . . . but fortunately, in the hands of capable cast and director, VANYA AND SONIA AND MASHA AND SPIKE manifests its way to a solid and heart-warming conclusion.

There’s some flaws in the script, for sure.  The Chekov references sometimes felt forced, there’s a brilliant monologue in the second act that seems out of place in the context of the larger theme of the play, and I hate when characters are responsible for exposition through long speeches.  That said, this is a very funny show with an excellent cast and hopeful message.

Vanya and his adopted sister, Sonia, live together in their late parents home.  All of their expenses are funded by their sister Masha, who is a famous actress.  She’s visiting – and brings along Spike, her current boy-toy.  There’s a costume party, there’s a psychic voodoo-master housekeeper, and a naive, young neighbor.  Oh, and there’s a play about a molecule and global warming.  Confused yet?

Don’t be.  The show is much better than it might sound given that description.  Director Margaret Perry has assembled a very nice cast, who brings this comedic modern farce to live with gusto.  Sherman Fracher plays Sonia with an awkwardness and physicality that surprises.  Given her natural beauty, she has to work at it but boy is she good. There is a scene where she’s on the phone, alone on stage, that was absolutely beautiful.  Vanya, her brother, is brilliant played by Matthew Boston.  This film, television, and stage veteran has an air of confidence that aids him in depicting this insecure, and recently-out-of-the-closet older gay man with the right balance of light and dark.  His extended rant in Act Two is a highlight of the show, though it did feel a bit out of place to me.  He delivered it in such a moving way, though, that I teared up more than once.

Their sister, “Masha,” is played by Jennifer Johansen who was last seen in Dayton in GOD OF CARNAGE.  She has the air of a movie star who’s just inching past her prime but underneath you suspect that she hasn’t completely forgotten her roots.  “Spike,” the boytoy, is played by Ben Palacios and his abs.  He finds a nice balance between ADD-airhead and manipulative pretty boy. You could see why Masha might tolerate him – and not just for his body.  Kudos to them both.

Torie Wiggins is “Cassandra,” the housekeeper.  I’m always glad to see folks keeping her in town by giving her work, but can we stop with the “black housekeeper-type” roles?  Wiggins recently demonstrated her range in the one-woman show, TWILIGHT: LOS ANGELES 1992 and she can do more than this role allows.  She’s capable and deserves bigger, meatier parts. She did a fine job with the part, especially in Act Two, but I’m begging for more opportunities for her to be featured in roles that show her amazing skill set.

Speaking of someone I want to see more of, Alex Sunderhaus is back in town after graduating from Wright State a few years ago.  I discovered her in JEKYLL AND HYDE, where she was lovely as one of the female leads.  But I fell in love with her when I saw her flex her comedic acting chops in a student cabaret.  She is great here as “Nina,” the young neighbor who Masha is threatened by and Vanya is inspired by.  It’s a great character and she gets the most of out of.  The choices she makes in showing that Nina is smarter than she might appear at first glance, while maintaining a youthful exuberance are inspiring.  Cast her again and again, please.

David A. Center’s set is gorgeous; the kind of old house that fits the tone of show.  The exposed brick, the decor, it all works well.  the lighting was fine, practically unnoticeable, which is always a good thing.  I’m not sure why the actors were mic’d; they were doing just fine in the beginning of Act One without amplification and the mic-cable hanging on the back of the nearly naked Spike took me out of the moment. And there were times that lines became muffled due to the amplification. These are pros; let them act unencumbered by unnecessary technology.  In spite of my minor complaints, I think Perry’s direction is spot on.  She features each of the actors as appropriate and you can just tell from twitter and FaceBook that these folks are really enjoying the process.  I think we as audience members felt that too.

The Victoria Theatre is a grand old space; its nice to see a modern played staged on its stage.  I think if you’ll go give VANYA AND SONIA AND MASHA AND SPIKE a try, you’ll leave feeling just a bit more hopeful – and maybe a little more grateful for your family, no matter how dysfunctional you all might be.

VANYA AND SONIA AND MASHA AND SPIKE runs through March 22nd at the Victoria Theatre in downtown Dayton.  Click here for more information, including tickets.