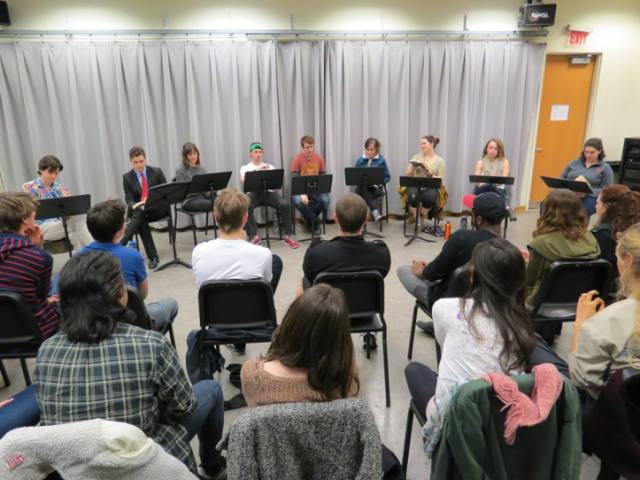 As my readers know, I can’t get enough of CCM and its talented folks.  So, last week I was thrilled to attend play readings on Monday, Tuesday, Wednesday, and Thursday all centered around the theme of “Alienation.”

First was the workshop reading of the CCM-commissioned THE GREAT MAJORITY by Gracie Gardner.  (Gardner and faculty member, Brant Russell, both attended Kenyon College). This play will be developed in-house by the artists at CCM and we’re very fortunate to be able to watch it in its various stages.  It will be performed later this April as a staged reading in the Cohen Studio Theatre.

This play has some very nice moments, well-developed characters, and a lot of funny dialogue.  The relationships are well-fleshed out.  There is a large amount of “overspeak,” which I find works better in small doses though it was very well done by this cast.

Highlights for me were the performances of Bartley Booz, Laura McCarthy, Alison Slutier, and Ryan Garrett.  I’m very excited to see how this play develops.

On Tuesday, k. Jenny Jones directed the twisted Adam Rapp’s STONE COLD DEAD SERIOUS.  His play, RED LIGHT WINTER, is one of my heartbreaking favorites – and this one is a show I’d love to see produced somewhere locally.  (Are you listening KNOW Theatre or Falcon?)

This is a show all about broken people, dealing with isolation and loneliness in whatever ways they can.  It’s darkly comedic and deeply sad.

James Egbert’s 16-year-old Wynne was appropriately mature for his age but also had a sweet naivety under the surface.  Andrew Ramsey’s (“Cliff”) frenetic sense of humor is reminiscent of a young Jim Carey.  Rachel Bumgarten’s “Snake Lady” was a breath of fresh air in Act Two as was Nick Heffelfinger in his breathless performance as the play-by-play host of a Samuri competition.

On the third night, Richard Hess directed MIDDLETOWN, a play that shadows the classic OUR TOWN in many ways but with a certainly modern sensibility.  From the very beginning, Josh Reiter’s “Public Speaker” sets the tone that this play is going to be a little wordy, all-inclusive, and quite witty.  Spencer Lackey, one of my favorites, plays the kind of cop we read about in the news far too often while Andrew Ramsey is back – a little more restrained this time – as a down and out mechanic.

But its the introduction of Julia Netzer as “Mary” and Rupert Spraul as “John” where our hearts are broken.  The magic and chemistry between these two – even while seated several feet apart – was as good as I’ve seen in fully staged productions.  Also exciting to watch was Katie McDonald as a librarian, a completely off-book Landon Hawkins as a wise landscaper, and Claire Combest and Andrew Ianacci as a pair of obnoxious tourists.  This is a play I could definitely see again.

Finally, Thursday’s production of PUNK ROCK was the most anticipated as evidenced by the addition of new faces in the audience.  D’Arcy Smith, the resident voice and speech teacher, for the program directed this troubling one-act about a British prep school.

We first meet “William” (Bartley Booz) and “Lilly” (Annie Grove) and they set the stage for this play that does not go where I thought it might originally.  Booz is terrifyingly confident on stage; there’s something just electric about his presence and talent.  Grove, who is a dynamite presence in her own right, just pops right along with him in the opening scene.  And their dialect and accents . . . just perfect.

Also extraordinary in this piece was Sydney Ashe as “Cissy,” the girlfriend to the bully, “Bennett.”  Ashe has a natural charisma that she channeled here as to not take away from the leads and the story.  Spencer Lackey played the brash bully and was just despicable, bringing every drop of malice to the character he could find.

Laura McCarthy, maybe the best actress in the program, is so authentic and real as “Tanya” and Owen Alderson held his own as “Nicholas.”  But perhaps the best discovery for me was just how good Josh Reiter is.  His poor, nerdy victim “Chadwick,” wasn’t overplayed in anyway.  I was in awe of this play, the timeliness of it, and the way it addressed mental health issues in a very real way.

What a treat each of these plays were to hear read aloud and I highly recommend that you try to discover as many new or newer works as you can in 2016.  When they are as well acted as these four, you can really hear the playwrights intentions loud and clear.

This year’s play reading series has concluded, there is a public reading of a play called THE ALIENS being held at Roh’s Street Cafe this Monday and Tuesday directed by Landon Hawkins and featuring Booz, Ianacci, and Carter Lacava.  Here’s a link to the FaceBook event. I’m going to try to fit it into my busy schedule.

Next up for CCM Drama is the main stage production of AH, WILDERNESS directed by Terrell Finney.  Click here for more information.